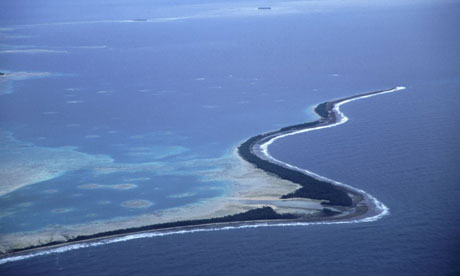 “Our islands are disappearing, our coral reefs are bleaching, we are losing our fish supplies. We bring empirical evidence to Copenhagen of what climate change is doing now to our states,” -Dessima Williams, a Grenadian diplomat speaking for Alliance of Small Island States

Global warming induced seal level rise is already happening, and in all likelihood will continue for the foreseeable future. To many of us, this is an abstract concept with little everyday relevance – what do I care if the sea rises 3 millimeters a year? Well, 3mm is a lot when you live on an island small island nation that is barely above sea level. In Copenhagen, the Alliance of Small Island States (AOSIS) – a coalition of 43 small and extremely vulnerable Island Nations – has called for a new legally binding treaty that will cap temperature rises to 1.5 degrees C. The proposed agreements to date have focused on a 2.0 degree C temperature increase target. Holding temperature increases to 1.5 degrees would mean stabilizing atmospheric concentrations of CO2 at about 350 parts per million (ppm) – currently, concentrations are at about 387ppm and increasing every year. According to the International Energy Agency, the aggressive shift in the target will add about $10.5 trillion extra in energy-related investment by 2030 – a figure that is untenable to many Nations would would be asked to foot the bill. Many think that the 2.0 degree C temperature increase target is ambitious considering the current pace of action on the global scale. The small island nation of Tuvalu has been a vocal advocate of this aggressive target. This nation’s emissions are tiny compared to total global output, and is essentially powerless to stop climate change without a global treaty. For Tuvalu, the issue of climate change and sea level rise is not abstract. It is real and it is happening now. There is a very real possibility that Tuvalu will be inundated and lost to the sea – sinking 3,000 years of history and culture forever. I have never been to Tuvalu and I didn’t know where it was in the world before today. But the idea of losing it forever saddens me unspeakably, not only on behalf of the residents of the country and others like it, but also because I may never have the option to explore this tiny island nation. Global warming threatens to relegate nations, peoples, cultures, traditions, foods, animals and so many other things to the history books for good. I hope that our leaders in Copenhagen have the will and commitment to fight to save out climate and the rich diversity of life and cultures it supports. And I hope that as individuals, we are all committed to reducing our carbon footprints today to help make that process a little easier.