Saving Rainforests and the REDD Program 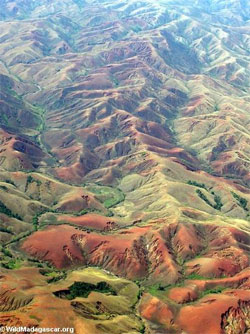 An article published in Mongabay goes deep into the international issues surrounding REDD, or “reduce emissions from deforestation and degradation,” a program that seeks to make forests economically valuable as living entities. The shocking image to the right shows deforestation-induced erosion in Madagascar from October 2004. Without a plan to stop the deforestation of our world’s forests, any global climate treaty would be avoiding dealing with the estimated 20-25% of global CO2 emissions. “The premise of REDD is straightforward: tropical forests store roughly 25 percent of the planet’s terrestrial carbon, more than 300 billion tons. When forests are cut—their vegetation burned and timber converted into wood products—much of this carbon is released in the atmosphere as carbon dioxide.” “The clearing of 50,000 square miles of tropical forest annually accounts for roughly 20 percent of global emissions from human activities—a share larger than all the world’s planes, ships, cars, and trucks combined. In other words, despite the attention given to the fuel efficiency of cars and the number of flights taken by celebrities, parking all the world’s jets and cars still wouldn’t offset the annual emissions from global deforestation.” Read the rest of this informative article here>>